STIR futures are not the ideal instrument for determining policy rate change probabilities since they are LIBOR or EURIBOR linked derivatives. These 3 month interbank fixings are not the same as policy rates and there is often substantial disparity between them. However, STIR futures are often used to speculate on or hedge against changes in official interest rates due to their liquidity and transparency since all short rate products will generally reflect changes in policy rates.

There has recently been much in the UK press about the Bank of England’s (BOE) forward guidance policy.  Market expectations of base rate increases have been pulled forward in response to improving economic conditions, particularly the rapid decline in unemployment.

It is possible to determine the probabilities of base rate changes within a particular time frame by the use of a specific instrument called a Meeting Dated Overnight Index Swap.

The table below shows the BOE MPC meeting dates for the next year and corresponding meeting dated OIS rates. 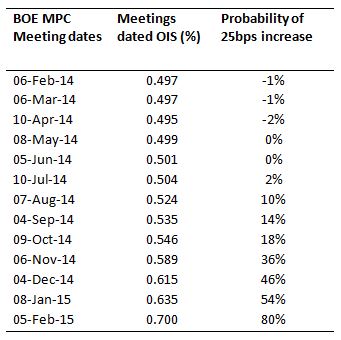 The rate for the MPC meeting on 8th May 2014 is 0.499%. This rate is the market rate of a one month forward starting OIS, starting on 8th May and maturing on 5th June. 0.499% is the fixed OIS rate quoted against receiving compounded daily SONIA for one month between these dates. If base rates were increased on or before 8th May from the present level of 0.5% to 0.75%, then the OIS fixed payer would be in the money, paying just 0.499% for a month against receiving SONIA which would have increased to around 0.75%.

The probability of a 0.25% (25bps) increase in the base rate on or before 8th May would be calculated as:

This is basically saying that the market puts 0% probability of a 25bps base rate increase occurring by May 2014. This probability has increased to 80% by February 2015 reflecting the current market consensus for the first 25bps increase in base rates to occur early in Q2 2015.

From a traders perspective, if rates were thought to increase sooner and faster than expected, then the curve would steepen (buy Short Sterling calendar spreads) and if rates were thought to be on hold and increase at a much slower rate than forecast, then the curve would flatten (sell Short Sterling calendar spreads). Watch this space…